Designated in 2010 as an Outstanding Historic Event.

Nominator: The Town of Burin

On Nov. 18, 1929, a subterranean earthquake took place 18 kilometres below the seafloor at the mouth of the Laurentian Channel. The earthquake and the resulting underwater landslide created a tsunami that devastated many parts of the Burin Peninsula – particularly the communities of Port au Bras, Kelly’s Cove (Burin), Taylor’s Bay, Lords Cove and Lamaline.

The tsunami created losses that were both immediate and long-lasting: 27 people died in the tidal wave, the infrastructure associated with the Burin Peninsula’s fishery was devastated, and the geological event created large-scale ecological change on the ocean floor which further affected the fishery. These losses were experienced collectively throughout Newfoundland as demonstrated by relief efforts, which led to lasting social change and development through the Women’s Institutes.  The tsunami was also experienced on the national level, given the economic importance of the fishery and the massive effort and expenditure needed to rebuild. The timing of the event added to its cataclysmic nature: it occurred on the cusp of the Great Depression as Newfoundland was struggling economically.  Further, the tsunami is recognized internationally by scientists and disaster strategy planners as a significant event from which lessons are still being learned.

Tsunami 1929: The Silence of the Sea – Virtual Museum of Canada 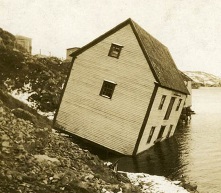 House found offshore the night of November 18-19, 1929 after being swept out to sea by the tsunami. The house was towed to shore by two men in a small boat. From The Rooms Archives.

Eastern Cove Pond, Lord’s Cove. The Rennie home, at centre, was grounded in the pond. Sarah Rennie and three of her children were found drowned in the kitchen. Survivor Maggie Rennie was found in her bed on the second floor. From The Rooms Archives. 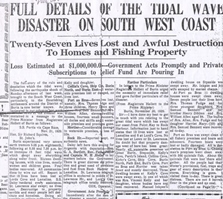 News of Destruction. From Virtual Museum of Canada. 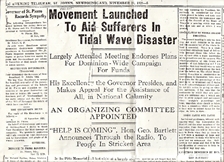 Appeal for relief fund. From Virtual Museum of Canada. 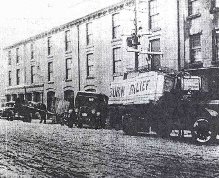 Burin Relief supplies prepared in St. John’s during the winter of 1929/30. From the Centre for Newfoundland Studies Archives, Memorial University.