Designated in 2015 as Exceptional People From the Past.

The 19th century outport merchants made a significant historic contribution to Newfoundland and Labrador’s economic development, patterns of settlement, and community life. They also impacted the province’s political and cultural development. Although a merchant typically had headquarters in a bay or region, the majority were also involved in both fishing and supplying elsewhere, such as in the Labrador and French Shore fisheries; the seal hunt; and the western boat and Bank fisheries off the south coast.

While sometimes seen as oppressors of the fishermen in popular myth, outport merchants provided much-needed capital for the prosecution of the fishery and were sometimes agents for positive social change in communities, many of them having served in Newfoundland’s legislature.

Under this category, the following merchants are designated:

Born in the British Isles, Thomas Ridley established the prominent firm, Thomas Ridley & Sons in Harbour Grace. He was sometimes a controversial figure, as shown by a number of violent incidents between him and fishermen during the 1830s. In 1842 Ridley was elected to represent Conception Bay in the Amalgamated Legislature. The firm further expanded during the 1850s and 1860s, including sending vessels to the Labrador fishery, seal hunt and the Bank fishery. In 1870 the firm began to experience financial difficulties and went out of business in 1873, an insolvency that was felt all over the province.

Roger Sweetman was born in Ireland, the son of Pierce Sweetman, a partner in the supply firm Saunders & Sweetman. As a young man, Roger Sweetman was sent to Placentia to oversee the firm’s trade and under his direction the firm played an important role in the expansion of settlement in Placentia Bay and along the Cape Shore. He was elected member for Placentia and St. Mary’s in the first House of Assembly, in 1832 and played an important role in improving local conditions for residents.

John Bingley Garland was born in Poole, England, the son of a Poole- Trinity merchant. Garland spent two years overseeing the family establishment at Trinity between 1819 and 1821, after which he returned to the management of the English end of the trade at Poole. After becoming principal partner in 1830, Garland returned to Trinity in 1832 and was elected to the first Newfoundland House of Assembly, serving as Speaker. He returned to Poole in 1834.

Presentation and unveiling of the Saunders and Sweetman flag

Thomas Ridley. From the Encyclopedia of Newfoundland and Labrador. 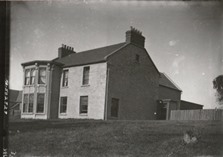 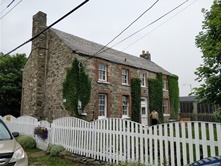 Fishing premises, Harbour Grace, circa 1910. From The Rooms Archives.

Blenheim House, Roger F. Sweetman’s home in Placentia. House was built in 1786 and remained until 1941. From The Rooms Archives. 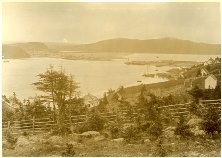 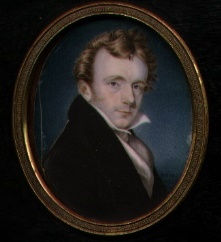 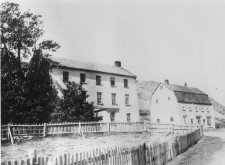 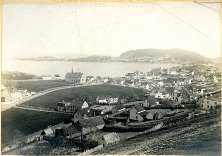