Designated in 2011 as a Unique Place.

The establishment of the cottage hospital system was an important step in the development of professional, socialized health care, especially in rural parts of the province.

Before the establishment of the Cottage Hospital and Medical Care Plan in 1935 (or Cottage Hospital System), there were only eight hospitals in the country outside the capital of St. John’s. Health care available to residents in areas not covered by those eight hospitals consisted primarily of individual physicians in private practice. People living in the smaller outport communities – almost half of Newfoundland’s population – had few if any health care services. Infant mortality rates were most shocking: in 1934, on the eve of the Cottage Hospital System, the infant mortality rate was 102.8 per 1000 births and accounted for 19.3% of all registered deaths in Newfoundland that year. Newfoundlanders also had very high rates of malnutrition and infectious diseases.

When the Commission of Government took office in 1934, it immediately recognized that Newfoundlanders needed increased and improved health care services. The Commissioner for Public Health and Welfare, Sir John C. Puddester, and the department’s Secretary, Harris Munden Mosdell, became the driving force behind health care reform.

The Cottage Hospital System was part of a national health insurance plan in which local families paid a fee of (initially) $5/year which permitted them access to medical care and hospital facilities (maternity services, dental extractions, and outpatient medications usually cost extra). For those who could not afford the fee, the plan allowed families to pay whatever they could afford in the form of cash or commodity, such as fish, firewood, or produce. In this way, the plan was particularly sensitive to local traditions and created a flexible means of access for people with limited resources.

The first cottage hospital opened in Old Perlican in 1936, followed by 18 others built across the Island until 1954. The Bonne Bay Cottage Hospital officially opened in July 1940, although it admitted its first patient in December 1939. It was one of the largest of the cottage hospitals in operation, containing twenty-three beds, two cots for babies, x-ray facilities as of 1943 (for which the community fundraised), and a hospital staff of ten. At the time of its construction, the Bonne Bay Cottage Hospital at Norris Point stood out as the best designed facility within the entire Cottage Hospital System, and was also unique in that its construction largely came about after an active local lobby effort.

Today, the Bonne Bay Cottage Hospital is recognized as a representative example, and one of a handful of remaining cottage hospital complexes, of this important stage in the development of Newfoundland and Labrador, especially as it is still used as a resource for community health and well-being, and is a place committed to interpreting the cottage hospital story.

Repairs being made to Bonne Bay Cottage Hospital. 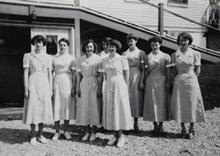 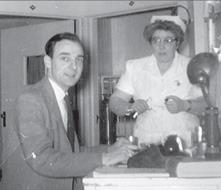 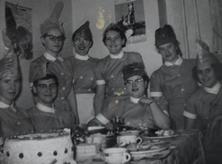 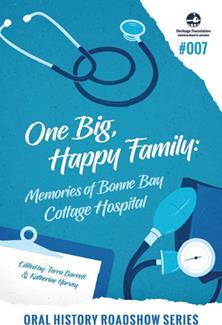