Designated in 2017 as a Distinctive Cultural Tradition and Practice.

In the creation story of the Labrador Inuit a great flood fills the earth leaving only one family on the highest mountain with their possessions and dogs. When the flood recedes, the family takes their dog team and enters into the world as the first Inuit. Sled dogs have always been part of Inuit culture and were the means by which the Inuit culture spread across the Arctic and Subarctic. The first Inuit to come to Labrador brought with them their sled dogs – dogs that allowed them to hunt, haul heavy loads and travel vast distances along the Labrador coast and interior.

When European settlers arrived in Labrador and Northern Newfoundland they quickly adopted sled dog technology from the Inuit. Dog sled teams were essential to winter survival in the region. Besides being a means of transportation between settlements, they were essential for carrying goods and supplies and expanding the reach of hunters and trappers.

Over time dog teams were used across Newfoundland and Labrador during the winter months to carry mail, to move timber in lumber camps, and to help with household chores like carrying wood and water. They were an essential component of the Grenfell Mission’s medical service. They allowed doctors and nurses to provide medical outreach and transported the sick and injured to clinics.

The use of dogs as working animals was not limited to the winter season. Other times of the year draught dogs towed wheeled carts to make deliveries for shopkeepers and to transport light loads around communities. Teams of dogs have been documented hauling rocks to clear land and even pulling plows to till soil. Larger dogs such as the Newfoundland or St. John’s Water Dog were also used to tow carts and sleighs for solely recreational purposes.

The introduction of the snowmobile led to the decline of sled dog use while wheeled technology replaced draught dogs. Recreational sled dog racing is now the only reminder of the once vital role of sled and draught dogs in our province.

This extinct N.L. dog is the ancestor of all modern retrievers – CBC NL

Outside with Ryan Snoddon: How to dogsled (Video)

Dog teams at the post office in front of the Hiscock House, Trinity, circa 1900. From the Virtual Museum of Canada. 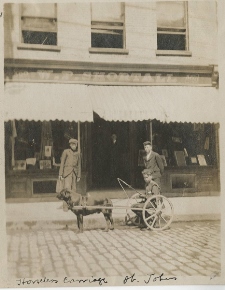 Dr. Wilfred Grenfell and his dogs, 1912. From The Rooms Archives.

Travelling among the Saglek Hills, Labrador, circa 1912. From The Rooms Archives.

Daphne and Diana Davidson in cart drawn by Newfoundland dog, Bruce, outside Government House, 1913. From The Rooms Archives. 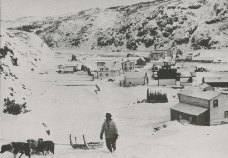 Wood haulers, Robert’s Arm, circa 1938. From The Rooms Archives. 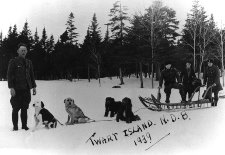 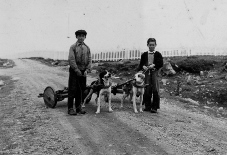 Two boys with dog carts, St. Lawrence, circa 1940. From The Rooms Archives. 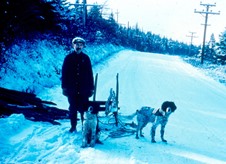