Designated in 2013 as an Outstanding Historic Event.

Four moose were introduced to the Island of Newfoundland near the town of Howley in 1904. Positive and negative, the (estimated) 150,000 descendants of these hungry herbivores have left an indelible mark on this province’s identity, culture and landscape. Moose were originally introduced as part of a wider government initiative to develop the Island’s interior. It was hoped that the animals would attract big game hunters – a new market for Newfoundland’s new railways. The meat would also sustain workers needed in the burgeoning mining and forestry industries – a key to diversifying the country’s fishing-based economy. With few natural predators and finding Newfoundland the perfect habitat, moose thrived and the rest is history. Today, moose are so numerous that they pose a hazard to drivers, and their voracious appetites are altering the native forest. But the moose is none the less an important part of this province’s identity. Moose meat is a feature on the BBQs of community festivals and the menus of gourmet restaurants promoting local food, and the annual moose hunt is celebrated in story and song as an opportunity for people to reconnect with the land.

LEARN MORE > Commemorations Research Paper – The Introduction of Moose to the Island of Newfoundland, by Allan Byrne 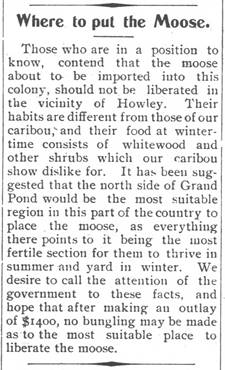 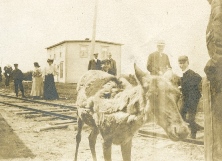 Spectators and moose calf by Reid Newfoundland train tracks, 1909. From The Rooms Archives. 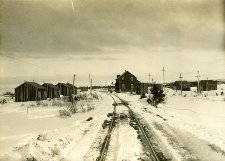 Station and shacks at Howley, circa 1925. From The Rooms Archives. 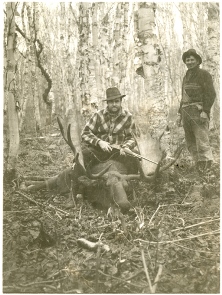 Hunter with a moose carcass, guide Jim John looking on, circa 1930s. From The Rooms Archives. 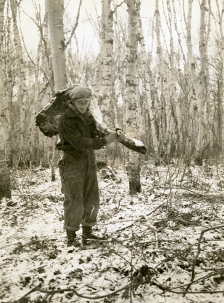 Unidentified guide with moose quarter, circa 1930s. From The Rooms Archives.