Designated in 2014 as an Outstanding Historic Event.

In 1959 the loggers that worked for the Anglo-Newfoundland Development Company (AND) in Grand Falls went on strike for better wages and living and working conditions. This would become one of the most bitter and divisive labour disputes in the province’s history. The loggers were represented by the International Woodworkers of America, headed by the charismatic Landon Ladd, Eastern Director of the Union. AND was not supportive of the formation of the union, and rejected recommendations in 1958 to increase wages and better the working conditions.

In 1959 the workers went on strike. With the media on their side, AND began a campaign to vilify the workers. In February Premier Joseph R. Smallwood publicly lambasted the IWA and announced the formation of his own union to represent the loggers. Legislation was enacted to decertify the IWA’s two locals. With this heavy-handed approach the Premier was condemned by unions and other organizations nationally and internationally.

With emotions on both sides running high, the stage was set for the tragic events on March 10, 1959. The previous day, the IWA strikers in Badger re-enforced the picket line. On March 10, AND brought in strikebreakers along with a re-enforced RCMP detachment from Grand Falls and a squad of Newfoundland Constabulary from St. John’s. While there are disputes over who started the riot, at the end 24-year old Constable William Moss lay fatally injured. He died two days later.

This tragic event ultimately led to the end of the strike. The Smallwood government blamed the IWA for the death and Smallwood’s union negotiated a deal with AND.

Ultimately the strike did lead to improved working conditions for the loggers, and came to signify a new era where the health and safety of workers is a priority for all employers.

LEARN MORE > Commemorations Research Paper – Not a Strike but a Civil War: The International Woodworkers of America (IWA) Loggers’ Strike and The Badger Riot, by Paul W Collins, PhD

Women at IWA picket line, 1959. From Facebook Group The Badger Riot by J. A. Ricketts. 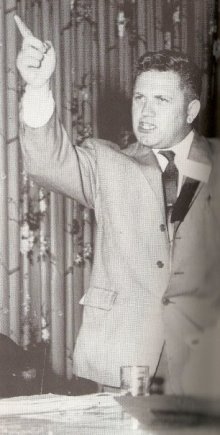 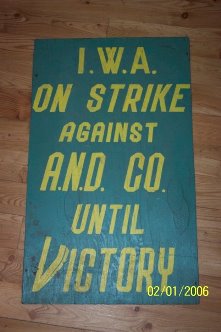 Picket sign used during the loggers strike, 1959. From Facebook Group The Badger Riot by J. A. Ricketts. 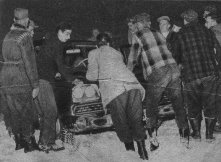 Loggers block a car at a picket line, 1959. From Facebook Group The Badger Riot by J. A. Ricketts. 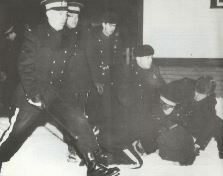 RCMP and RNC officers in Badger on the night of March 10, 1959. From Facebook Group The Badger Riot by J. A. Ricketts. 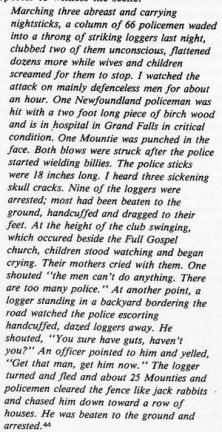 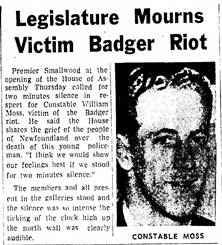 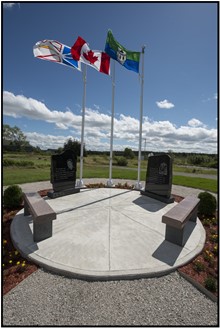 The Badger Riot Memorial in the town of Badger.