Fogo Courthouse and Public Building is a two-storey, wooden structure with a hipped roof and two storey central bays. Built in 1908 by the government of the Dominion of Newfoundland, the property is located on Main Street in the community of Fogo, NL. The designation is confined to the footprint of the building.

Fogo Courthouse and Public Building has been designated a municipal heritage site by the Town of Fogo due to its historic and aesthetic value.

Fogo Courthouse and Public Building has historic value due to its ties with the judicial history of the community and the region. From the late 19th to the mid 20th century sessions of the Northern Circuit Court, both the local Magistrate’s and Supreme Court, were held in this building. Fogo’s judicial history dates to 1865, when residents petitioned the Dominion’s chief justice for “a suitable Court House and Lock-up.” In 1872 the Newfoundland government bought the land where the building now stands from James Rowsell for £160. The first Fogo Courthouse was in operation by 1873. In 1908 the “old and dilapidated” building was sold to Patrick Miller at public auction for the sum of $115.00, on the condition that Miller had it moved off-site. A new courthouse, similar to one built in Burin, was then constructed on the land. It had two main facades, one facing Fogo Harbour, and the other facing the main road through the town. It had offices upstairs for both the local policeman and magistrate along with living quarters and a jail downstairs.

Fogo Courthouse and Public Building has additional historic value for its dual role as a government service centre. For many years telegraph, postal and customs offices were located in this building, making it an important public space. Besides its official functions, the building sometimes served for social activities (like a dance in 1910), and in the 1930s hosted meetings of the Fogo Hospital Committee. In 1949 the exterior was considered well maintained, though neither the living quarters nor jail were considered satisfactory by this time. Its days as a courthouse and jail were drawing to a close, but it continued to be used as a public building for many years after.

Fogo Courthouse and Public Building has aesthetic value as an example of an early 20th century institutional building in an outport setting. The building is unusual in that it was designed with two main facades, one facing the harbour and one facing the main road through the town. This unique design is reflective of its original use as a public building, as are the muted accents on its exterior. The original design included two-storey protruding bays with hipped roofs on the main facades, large trim boards on the corners and around windows, and large mouldings and brackets at the eaves. This combination of quiet details resulted in a refined, respectable façade.

Fogo Courthouse and Public Building has aesthetic value due to its environmental setting, landmark value and proximity to the community’s historic resources. Located along Main Street and overlooking the harbour, it is a well-known landmark to residents of the community and the greater region. It is located within a district that boasts many historic buildings and sites, including Fogo United Church, Our Lady of the Snows Roman Catholic Church, St. Andrew’s Anglican Church and Cemetery and the Old Schoolhouse.

All features which relate to the building’s aesthetic value, including:

– original moulding and brackets on eaves;

– location and orientation of building in respect to the surrounding environment, and;

– the geographical setting of the building along Main Street. 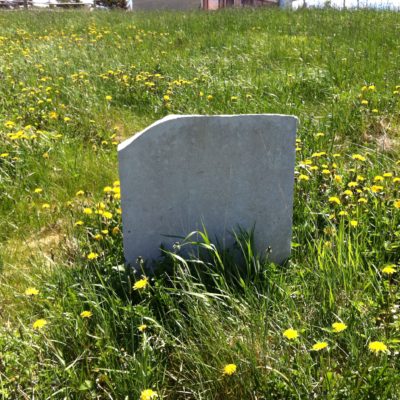 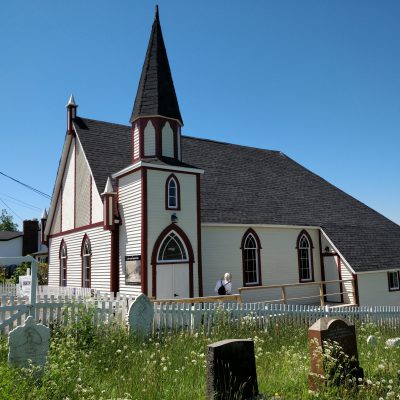 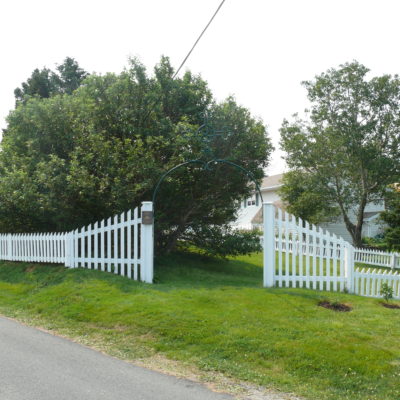