John Whitt’s Stage is located on the Main Tickle of Change Islands, on the northeast shore of the South Island, and near the causeway that links the two islands that make up Change Islands. It was built around 1880 by John Whitt, who was born in Change Islands in the 1850s. The stage was later purchased by Arch Hoffe, who fished off Fogo Island and Little Fogo Island. He fished for cod, herring, salmon, lobster, seals and bait fish. Carl Diamond acquired the stage from Arch’s wife Ada. Carl’s wife Margaret recalls, “Carl bought John Whitt’s Stage from Ada Hoffe in 1955. He had a 26 foot boat with a seven horse power Atlantic engine and he fished Little Fogo Islands for cod. He also caught lobster, herring and bait fish.” The stage was in poor condition and the Diamond family were concerned that it might fall down, or that it would have to be taken down for safety reasons. In an effort to save the structure, Change Islands based Stages and Stores Heritage Foundation applied to the Fisheries Heritage Preservation Program for assistance to restore the building. The south side sill was completely rotten, the roof needed repairs and the clapboard needed to be replaced. The south and east walls of the stage had to be jacked up to install the new sill. A boat was used to aid in the placement of new building supports as the front of the building is entirely over water. The sill and supports helped to straighten the building, which resulted in a noticeable change in the previously sagging roof line. New felt and boards were applied to the roof, the bridge to the second storey was repaired, the stage head was rebuilt, windows and doors were replaced, new trim and clapboard were installed and the entire building received a fresh coat of red paint. 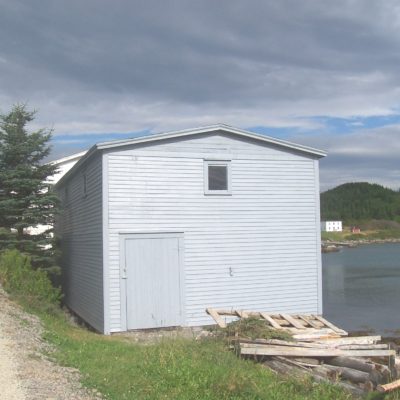