Our Lady of Mercy Roman Catholic Church is an imposing Renaissance Revival church prominently situated on the isthmus dividing St. George’s and Port au Port Bays. The designation is confined to the footprint of the building.

Our Lady of Mercy Roman Catholic Church has been designated a Registered Heritage Structure by the Heritage Foundation of Newfoundland and Labrador because it has aesthetic, historic, cultural and environmental values. Our Lady of Mercy Roman Catholic Church has aesthetic value because it is a remarkable essay in Renaissance Revival architecture with a superbly preserved interior. Apart from being one of the largest, it is also one of the finest Newfoundland churches and was designed by one of the province’s noted architects William F. Butler. Standing at 35m tall this impressive church boasts a front façade with corner columns topped with cupolas and finials. Balance is achieved with a central tower bracketed by symmetrical scrolls, and a large central cupola with cresting tops off the front façade. Trifoil, quatrefoil and multifoil windows can be seen on several facades, while stained glass and arched labels are prominent window features. The church’s multigables add dimension and interest while the simple, narrow wooden clapboard attests to the use of local materials in an ornate setting. The elaborate interior is a result of local craftsmanship, gifts to the church and imported religious paraphernalia. The parishioners imported the wood for the interior from mainland Canada, with the ornate designs being completed by local craftsmen. The same craftsmen also made the pews. Many statues have been donated to the church by residents and the pulpit was given in 1925 by St. Patrick’s Church in St. John’s. Our Lady of Mercy Roman Catholic Church has historic value because of its associations with W. F. Butler and Father James Joy. William F. Butler was a renowned St. John’s architect who was also responsible for the heritage structures Winterholme, Job Kean’s Store, Bartra House, Brother T. I. Murphy Centre and many other high style buildings. Butler and his wife were among the 94 passengers and crew who were drowned in the infamous sinking of the S.S. Florizel in 1918. Father James Joy guided the construction of the church and was the first resident priest on the Port au Port Peninsula. He was minister from 1900 until 1933. In addition to his efforts in constructing Our Lady of Mercy Church he was known as a social reformer and leader. Joy became involved in a dispute in 1904 that eventually led to a repealing of a convention in existence since the Treaty of Utrecht in 1713 which had denied Newfoundland full sovereignty over the west coast of the island. Father Joy was also given credit for starting a Newfoundland smelt trade with the United States in 1918. Our Lady of Mercy Roman Catholic Church has cultural value because the church was built to serve the Catholic population on the eastern end of the Port au Port Peninsula. The impetus for construction was the opening of a limestone quarry in nearby Aguathuna by the Dominion Iron and Steel Company. The company helped fund some of the work and provided machinery and free labour. The work was not completed until 1925, but the 11 year construction period allowed the massive church to be completed debt-free. When the quarry opened local residents expected the area to develop into a major centre. Residents also expected every able-bodied man and youth old enough to work to donate one week of work per year to the project. Although the expected population boom did not occur the church maintains a parish of approximately 1200 people. Our Lady of Mercy Roman Catholic Church has environmental value because it is located on a narrow isthmus separating St. George’s and Port au Port Bays. Being 35m tall it is highly visible from both sea and land. Source: Heritage Foundation of Newfoundland and Labrador property file “Port au Port – Our Lady of Mercy Roman Catholic Church – FPT 1604” 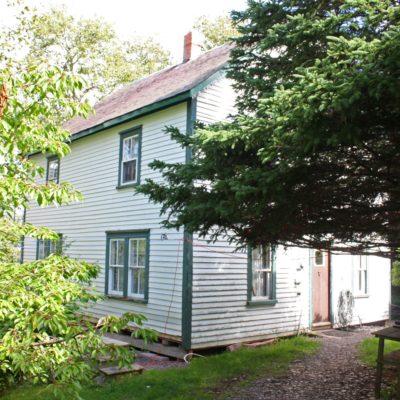