R.J. O’Brien’s General Store is a mid-twentieth century, one storey commercial building located on Harbour Road in Cape Broyle, NL. The designation is confined to the footprint of the building.

R.J. O’Brien’s General Store was designated a Registered Heritage Structure by the Heritage Foundation of Newfoundland and Labrador in 2005 due to its aesthetic and cultural value.

R.J. O’Brien’s General Store has aesthetic value due to its design. A uniquely shaped building, O’Brien’s store has rounded corners at the front facade. With a shed roof and large plate glass windows with wooden shutters, this store hasn’t changed since its construction in the mid-twentieth century. The recessed doorway has curved concrete corners with vertical grooves and the main door includes a storm door of two narrow doors that open in the center, and a similar interior door. The original entablature has the name of the store, R. J. O’Brien General Dealer, a feature which is typical of a mid-twentieth century mercantile building. Other features which reflect the commercial nature of this building are the tiny rear windows and the curved, narrow plank loading doors located at the eastern curved corner. The exterior of this building is faced with narrow wooden clapboard, and the corners are sheathed in wooden shingles. The interior of R.J. O’Brien’s General Store is equally valuable because it remains in its original mid-twentieth century condition. The floor is made of narrow softwood and the walls are sheathed in narrow plank, while the ceiling is constructed of tongue and groove wood. The walls are lined with original wooden shelves, some with drawers underneath. The office inside this store has a curved wall and wooden door, reflective of the exterior corners. The main threshold is worn on the left as only the left side of the double doors was used and the right side remained latched. This vernacular style store has changed very little since its original construction.

R. J. O’Brien’s General Store has cultural value because of the story that explains its curved exterior corners. The store is located just below the family home, which was accessed by a narrow driveway next to the store. As told by Mr. Ronald (as Ronald J. O’Brien was referred to in the community) his horse was particularly fast and impetuous and used to get excited when it got near home. When pulling a cart or slide up the driveway it would clip the corner of the store. After many hard bumps and jolts Mr. Ronald became fed up with daily knocks and changed the sharp corners to curved corners to allow the horse easier navigation. The change worked and the horse never hit the building again. In his book Newfoundland Modern: Architecture in the Smallwood Years, architect Robert Mellin suggests that the round corners were influenced by buildings with similar corners in St. John’s, such as the then Hickman Motors showroom on Water Street West.

R. J. O’Brien’s General Store has further cultural value for generations of Cape Broyle residents who were customers. Known as Mr. Ronald’s Shop, it was open weekdays from 9-5 but would close every noon for dinner. On colder days, the wood stove in the store would be surrounded by men discussing the latest news. On Christmas Eve Mr. Ronald would stay open later for last minute shoppers. As it was located next to a school, it would be a busy place every afternoon when school let out and children stopped in to pick up a treat on their way home.

All those original exterior elements that embody the vernacular style of outport mercantile establishment, including:

All those original interior elements that embody the vernacular outport mercantile establishment, including:

-all wooden finishes such as softwood floor, plank walls and tongue and groove ceiling;
-all original shelving, drawers and cabinets; and
-curved wooden office door and wall.

According to Ronald J. O’Brien’s cousin, a male in his late 70s in 2005, around 1900 Ronald’s father John (Jack or Anglo) O’Brien built a two storey twine shed on the land now occupied by Ronald’s shop. Around 1945 this shop was torn down. In 1946 Ronald had the present one storey shop with round corners built. Jim Jones and Little Mickey O’Brien were the carpenters. 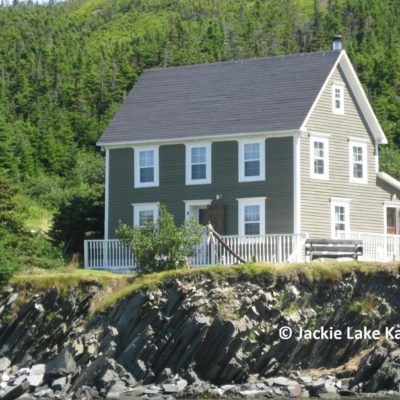 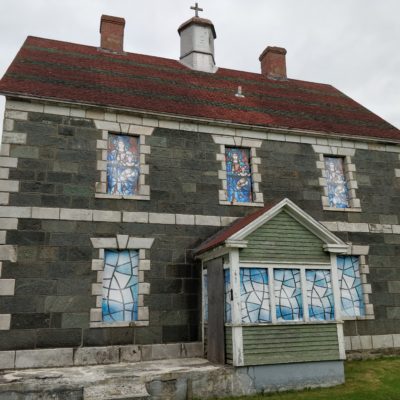