The Sexton/Wilansky House is a small, first-generation saltbox house with peaked dormers, located in the area of Trinity, TB, known as Hog’s Nose. The designation is confined to the footprint of the house.

The Sexton/Wilansky House was designated a Registered Heritage Structure by the Heritage Foundation of Newfoundland and Labrador in 2021 due to its historic and aesthetic value.

The Sexton/Wilansky House was first recorded on Noad’s map of Trinity in 1852 and may predate the survey by several decades. It is built near the former Slade and Kelson merchant operation in an area of Trinity, TB, known as Hog’s Nose. The house’s earliest known occupants were the Sextons who lived on the site for many years. A Mrs. Sexton’s house was recorded as burning down there in 1817 and it is possible the present home was built to replace it. Hughie Sexton was born in the house in 1886 to parents William and Mary.

Hughie Gilbert Sexton (1886-1958) was a carpenter and leatherworker who, at over six feet tall, was too tall for his own house. He was known for extending his shoes to fit his large feet and a resulting signature gait. Hughie was also a storyteller and writer of poetry and song best known for penning the nineteen-verse “Loss of the Ella M. Randolph” which recalls the loss of a ship and men at Little Catalina. The poem was printed several times in local papers and broadsheets and was later turned into a song. Hughie was a bachelor who shared the house with the Locke family in later years.

The Lockes owned Sexton/Wilansky House for two decades following Hughie’s death, before selling it in 1978. In 1981 it was purchased by the Wilansky family. Sam B. Wilansky was a Water Street (St. John’s) businessman and proprietor of The Model Shop who summered in Trinity for much of his life. He is also known for designing, with Louis Anderson, the registered Newfoundland Tartan, the colours of which are based on elements described in the “Ode to Newfoundland.” His son and family made several changes in keeping with the structure including the addition of traditional dormers.

The Sexton/Wilansky House is a good example of an early settlers’ dwelling which has evolved over time. These first-generation houses were often quite small. The ceilings of the Sexton/Wilansky House stand at roughly six feet and the house contained only five rooms in the early 1900s, though it has undergone some reconfiguration since then. Much of the interior was once taken up by a large chimney and fireplace and small rooms in the half-storey received little light. Its exterior walls are sheathed with thick planks joined with wood “splines” for rigidity and draft-proofing. This design was practical, requiring comparatively little fuel to heat.

All original features of the building which relate to its age and style including:
-first-generation saltbox form with asymmetrical gable roof;
-narrow wood clapboard and wood trim;
-2/2 wood windows and wood doors;
-wood shingle roof cladding;
-thick exterior wall sheathing joined with splines;
-two peaked dormers facing the water;
-surviving stone foundation sections; and
-the size and orientation of the house in relation to the street, community, and Trinity Bay. 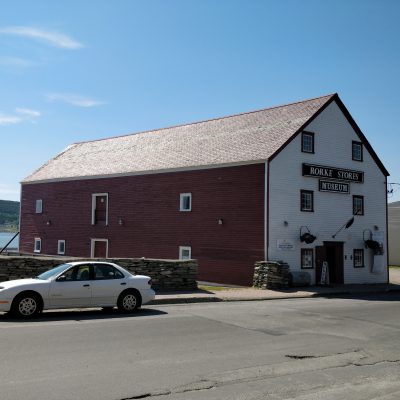 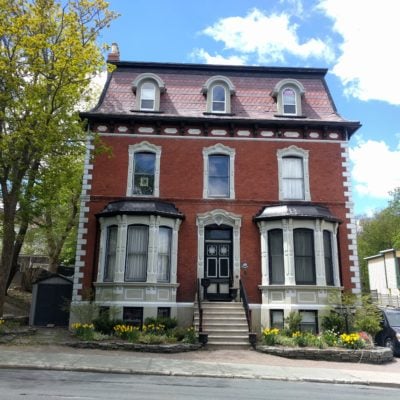