St. Andrew’s Anglican Church and Cemetery Municipal Heritage Site is located at 49 Main Street, Fogo, NL. The white, two-storey church has a clerestory, gothic arched windows and a steeply pitched roof with a tower to the right of the main entrance, which faces the cemetery on the church grounds. The designation includes both the building and churchyard cemetery.

St. Andrew’s Anglican Church and Cemetery has been designated a municipal heritage site by the Town of Fogo due to its historic, aesthetic and cultural value.

St. Andrew’s Anglican Church has historic value due to its age. It is the third church on the site, erected circa 1915-1918. The church is also historically valuable because the stained glass windows in the building stand as historical records of the Anglican community of Fogo Island West. Many of the stained glass windows were donated by parishioners in memory of deceased members, including war dead, as recorded by text incorporated into the design of the windows. These include a feature window with an image of St. Andrew, the church’s namesake, which is located in the chancel end.

St. Andrew’s Anglican Church has aesthetic value as the white, cruciform-shaped building exhibits many features which are characteristic of the Gothic Revival style of architecture in rural Newfoundland. Executed in wood, some interesting elements of this style include a clerestory, wooden gothic arched windows with tracery, a quatrefoil window, finials, and a bell tower with louvered windows and a steeple. These ornate design elements, coupled with the immense size of the building make a significant visual impact in the town.

The churchyard cemetery has historic value because of its age and gravemarkers and monuments, which contain local historical information. Extant gravemarkers indicate that the cemetery was in use as a burial ground from at least the 1760s and into the first half of the twentieth century. Many of the older gravemarkers indicate that the deceased were natives of English counties. Several of the most prominent gravemarkers or monuments commemorate members of the Slade family, whose fishing firms dominated trade in Fogo for nearly a century. A more recently erected granite war memorial monument on the cemetery grounds bears information about locals’ military service.

The gravemarkers and monuments are also artifacts on the cultural landscape. While there is at least one box tomb and several instances of wrought iron graveplot fencing, most graves are marked only by headstones. Generally, the early headstones are large, limestone tablet types, followed chronologically by white marble gravemarkers—materials and styles typical of their periods.

St. Andrew’s Anglican Church and Cemetery has cultural significance because the Church of England was the first and historically prevailing denomination in the community. This is made visible by the size of the church building in relation to others in Fogo, and the site’s prominent, central location. Located within a significant cluster of historic ecclesiastical properties along Fogo’s main street, including Fogo United Church and Our Lady of the Snows Roman Catholic Church and Schoolhouse, the St. Andrew’s Anglican Church and Cemetery Site has aesthetic value as a major feature of that streetscape. The proximity to and orientation of the church towards the grassy cemetery, together with the white, wooden fence which delineates the cemetery as church grounds, make clear the relationship of the building to the land. Together they hold several layers and centuries of local history at the heart of the community’s cultural landscape.

Architectural elements relating to the age and style of the church building, including:

– style of eaves and eaves mouldings;

– location and style of tower with louvered windows and spire;

– style, size and placement of quatrefoil window in the front gable;

– placement and style of entry porch.

Elements relating to the historic value of the cemetery:

– type, materials and placement of all gravemarkers, box tombs, monuments and fencing.

Further elements which contribute to the overall aesthetic and cultural landscape value of the site:

– orientation of the church and cemetery in relation to each other;

– natural topography of the cemetery;

Many of the older gravemarkers at the cemetery indicate that the deceased were natives of English counties (mainly Hampshire, Somerset, Dorset and Wiltshire), providing some insight into trade connections and settlement at Fogo. A marker for John Hayter Slade (d. 1783) and Robert Standley Slade (d. 1846) is distinctive because it is iron – a clue to the fact that the Slade family is one of the most prominent in Fogo’s history. Indeed, Slade firms dominated trade from Fogo for more than 70 years, and continued for more than a century, beginning with Poole captain John Slade (Sr.). His firm was well established in the Poole-Newfoundland fishery by the mid-1700s, being the major resident firm on Newfoundland’s northeast coast, with a key location at Fogo. His son, John Hayter Slade, became chief agent at Fogo. Robert Standley Slade was John Sr.’s great-newphew, and son of Robert Slade (Sr.), another of the family firm’s merchants at Fogo. A large limestone monument commemorating John Slade, Esq., another son of Robert Slade Sr., was erected at the cemetery by merchants of Fogo upon his death in 1847. Its size and placement near the road front of the cemetery make it quite prominent, in keeping with John Slade’s status as a benefactor of the church, merchant and politician. He was a Slade firm manager and Member of the House of Assembly for the Twillingate-Fogo district, as inscribed in the monument. 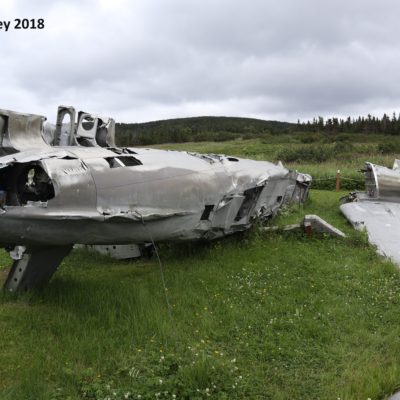 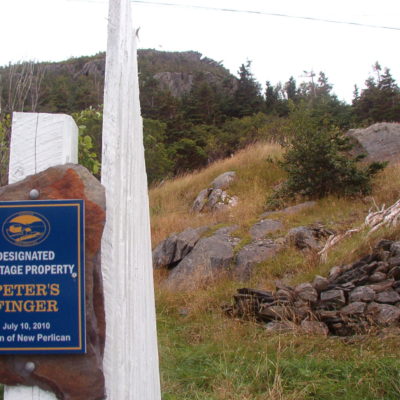 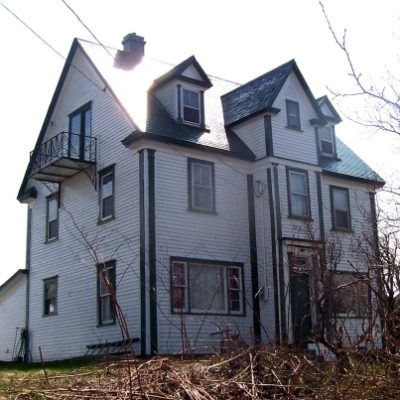