St. Andrew’s Presbyterian Cemetery is a cemetery containing approximately 151 plots, both for families and individuals, and is located on Military Road in Harbour Grace, NL. It is one of a few Presbyterian cemeteries in the province. The designation encompasses the entire property delineated by the fence abutting Military Road.

St. Andrew’s Presbyterian Cemetery has been designated a municipal heritage site by the Town of Harbour Grace due to its historic, aesthetic, and cultural value.

St. Andrew’s Presbyterian Cemetery is the resting place for many of Newfoundland’s first Scottish Presbyterian residents. During the 1800s, many shipping clerks and merchants came to Newfoundland from Scotland. They established companies focused on the fishery, sealing industry, international trade, and shipbuilding. Harbour Grace was Newfoundland’s second largest commercial centre at the time and had the second highest number of Presbyterians (400 at its peak, compared to 2000 in St. John’s). The Presbyterian Congregation in Harbour Grace was founded in 1854 by Scottish merchant John Munn. Reverend Alexander Ross, the first minister of the Presbyterian congregation in Harbour Grace, is buried at St. Andrew’s alongside his first and second wives, his infant child, and his second wife’s mother.

It is worth emphasizing the unique contribution of John Munn, for whom there is a monument in the cemetery erected by his family. John Munn came to Harbour Grace as a clerk and built a thriving business in the fishery. His other endeavours involved shipbuilding, banking (founding the Union Bank), publishing (the Harbour Grace Standard), agriculture (establishing the mill at Bannerman River), and politics (serving on the Legislative Council for 14 years). In addition to these pursuits, Munn was an influential philanthropist and contributed to the community in many ways.

Others from the mercantile class buried here include representatives from the Munn family (innovators in onboard salt cod and boneless cod, and once the largest general supply and mercantile business outside of St. John’s); the Duff family (involved in wholesale, shipping, and retail); the Jillard family (shipping and fish supply); the Archibald family (shoe factory, inn, and farming); the Cron/McGrath family (merchants); George Rutherford (wholesaler and retailer); the Moores/Nutbeem family (innovators in fresh-frozen cod and breeders of the Newfoundland dog), and many others.

While St. Andrew’s is often referred to as the ‘Merchant’s Cemetery,’ you will also find buried here many others who contributed to the community of Harbour Grace and beyond. Many members of Harbour Grace’s medical community are buried here. Those interred include Dr. William Allan (early expert in infectious diseases); Dr. Charles Cron (known as ‘Doc Cron’ and subject of a popular biography); Dorothy Duff Moores (one of the driving forces in the establishment of the regional hospital in Carbonear); and W. H. Thompson (chemist and pharmacist). In particular, the Thompsons were very philanthropic and contributed in many ways to the community. One of their well-known donations was the purchase of Harbour Grace’s first ambulance.

Various political leaders are buried at St. Andrew’s, including the aforementioned John Munn, William Duff, and Newfoundland and Labrador’s second premier, Frank Duff Moores. There is also a memorial to James M. Cron and Graham Duff, soldiers who fought and lost their lives in World War I. Harbour Grace writers and photographers Reuben, Max, and Bill Parsons, who chronicled Harbour Grace’s aviation history and other significant events, are interred at the cemetery. Harbour Grace owes its rich inventory of early twentieth century photography to these men. Reuben’s son, Lamont (‘Lal’) Parsons, is buried near his father and known for his skill as a World War II RCAF and RAF pilot. One of his infamous stunts – flying between the two spires of the Harbour Grace’s Immaculate Conception RC Church – was documented in a painting by artist Ian Sparkes. These are just some of the people buried in the cemetery – there are many more. Their histories and stories help explain their influence in the region and the need for further recording and preservation. The cemetery has tremendous potential as a focal point for visitors and historians alike.

All those elements that define the cemetery, including: 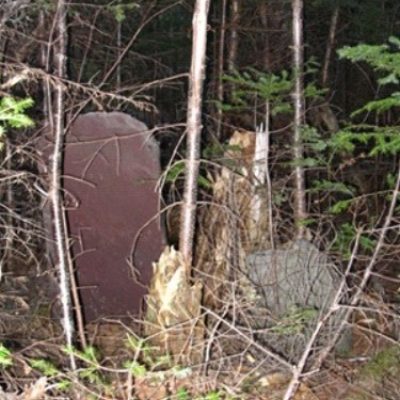 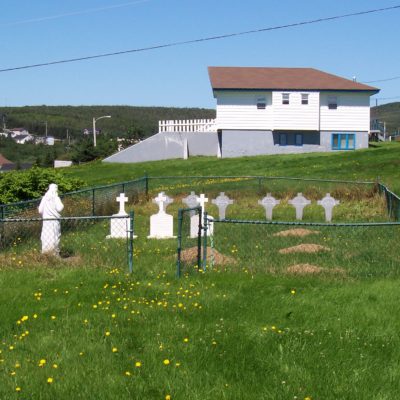 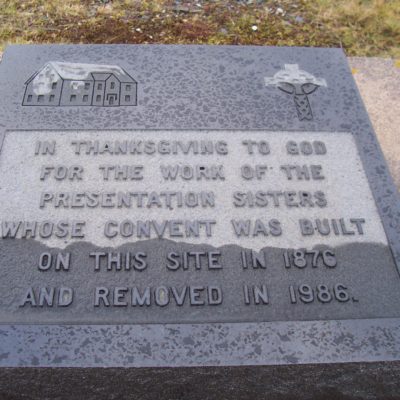