Designated in 2012 as a Distinctive Cultural Tradition and Practice.

For more than four centuries, Labrador trappers pursued their livelihood with innovation and adaptation, developing a multi-ethnic society that maintained varied traditions and shared technology and culture. While their impact on the economy was limited, their way of life was central to a significant phase in the development of the province.

The practice of trapping fur-bearing animals has existed in the Labrador Peninsula since pre-historic times. Aboriginal people used the animals for sustenance and the creation of clothing and tools. The arrival of European settlers, however, changed the importance of trapping from subsistence to that of trade. In the beginning, European seasonal workers trapped along the coast, a practice that eventually drew aboriginal people from the interior. As the importance of trade furs grew, trapping spread inward spawning many permanent settlements in the Lake Melville area. The practice continued for centuries but by the 1930s the fur industry was quickly declining, making it hard for many trappers to make a living solely on their trade. The development of various industries offering year round wage work eventually brought about an end of the trapping way of life as a means of primary employment.

Trappers were not a homogeneous group. At its height there were five distinct ethnic groups trapping in Labrador, the Innu, Inuit, English, French, and Métis each had specific trapping traditions and characteristics. These groups broke down into two types of trappers; those who trapped within easy distance of their homes, and those who traveled long distances and spent months in the wilderness maintaining their trap lines, often referred to as “Long Distance Men” or “Height-of-Landers.” While the Long Distance Men are considered to be the elite trapper that most people envision when discussing trapping, both groups established their own cultural traditions of language, song, story, ethics, material culture, and knowledge. Both groups pursued the same goals, used similar methods, learned from each other and coped with difficult conditions.

Many groups relied on the expert knowledge and bush skills of the Trapper. Explorers and businessmen seeking to utilize the natural resources of Labrador relied on their knowledge to guide them to suitable areas. Medical practitioners often relied on the trapper to get them into remote areas for emergencies and to aid them on their regular circuits. The clergy also employed them as guides and they were also called on to rescue many a traveler who ventured into the wilderness without adequate preparation or knowledge.

The expert knowledge of trappers was instrumental during the Labrador Boundary Dispute. Ongoing disputes over access to natural resources and the boundary between Labrador and Quebec eventually lead to Newfoundland and Quebec referring the matter to the Judicial Committee of the Imperial Privy Council in 1922. Newfoundland produced a number of arguments during the Trial but one of the central arguments hinged on the definition of the word “coast.” Evidence for their definition of coast was taken from the testimony of a number of Height-of-land trappers and it argued that the coast could be all the territory between the coasts and the ascertainable height of land or watershed behind it. Documentary evidence of trapping was used to show that Newfoundland held jurisdiction over a range of activities that extended inland to the watershed. These arguments proved successful and on March 1st 1927 the judicial committee sided with Newfoundland and boundary between Labrador and Quebec was established.

While trapping was a small part of the economy, the cultural way of life has had a much broader impact. It united people from various ethnic groups into a cooperative society; it encouraged exploration of the remote wilderness, and established permanent coastal and inland communities. Furthermore, the cultural and geographical knowledge base of the trapping way of life was central in the development of the province through the establishment of the current Labrador boundary.

Land & Sea: Trappers in the autumn in Labrador (Video) 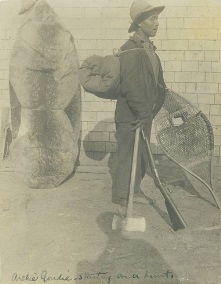 Archie Goudie starting on a hunt, circa 1910. From The Rooms Archives.

Davis Inlet trappers with dog team and komatik, circa 1910. From The Rooms Archives.

Bert Blake, Trapper of Grand Lake, circa 1920. From The Rooms Archives.

Trappers cabin, circa 1920s. From The Rooms Archives. 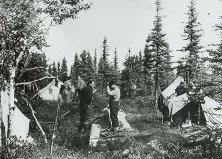 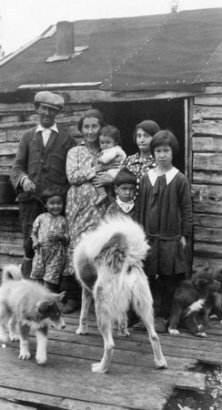 A trapper and his family at Lake Melville, circa 1930s. From The Rooms Archives.

Labrador trappers, circa 1930s. From The Rooms Archives. 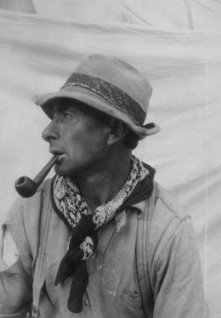 Murdock McLean, Labrador Trapper, circa 1930s. From The Rooms Archives. 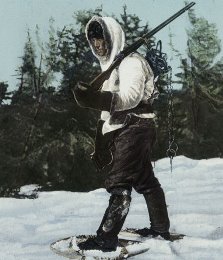 A Labrador trapper, circa 1937. From The Rooms Archives.

Grand River trappers nearing home, circa 1939. From The Rooms Archives.

A typical Labrador trapper’s tilt, circa 1949. From The Rooms Archives.