The Cemetery for Priests and Religious Sisters is a tiny cemetery located on a gently sloping piece of land near St. Lawrence Harbour and the Roman Catholic Church in St. Lawrence, NL. The designation encompasses the entire cemetery surrounded by a modern fence.

The Cemetery for Priests and Religious Sisters has been designated a municipal heritage site by the Town of St. Lawrence due to its historic and spiritual value.

The Cemetery for Priests and Religious Sisters has historic value because it holds the remains of six women and three men, nuns and priests, who were largely responsible for the establishment and perpetuation of the Roman Catholic presence in the town of St. Lawrence. All of the nine people interred in this cemetery were fundamental in shaping the small town and the existence of this cemetery is a fitting tribute to their contributions.

The nuns were members of the Congregation of the Sisters of Mercy of Newfoundland, a foundation established in 1842 in St. John’s from Dublin, Ireland. The cemetery speaks to the presence in St. Lawrence of this religious order known for its care of the sick, education of youth and pastoral presence to those in need. The St. Lawrence mission was established in 1871 and two of the sisters buried in this small cemetery were members of the founding community – Sister Mary Joseph Burfitt and Sister Mary Xavier Tarahan. Sister Mary Borgia McLaughlin, who is also buried there, was a native of Ireland who came to Newfoundland as a missionary to join the Sisters of Mercy and to assist them in their works of mercy. Through her brother’s bequest, Sister Mary Borgia provided funds for the building of a new two-room school and a new parish church and was long remembered as an exceptional benefactress to both the community and the parish. The sisters gave selflessly to the people of the community during times of distress and suffering, including the years of the Great Depression; the Tidal Wave of 1929; the Truxton and Pollux disaster of 1942; and the continual tragedy of the loss of many young miners through industrial disease.

The service of the priests began in 1883 under the authority of Father John Joseph Walsh (1852-1890), a St. Mary’s Bay native who was parish priest of St. Thomas Aquinas Parish. Father James J. Whelan (1845-1918) was also a St. Mary’s Bay native and he continued the call after the death of Father Walsh in 1890. Father Whelan was appointed parish priest of St. Thomas Aquinas Parish and served until 1902. At his request he is buried next to his longtime friend and predecessor in the little Roman Catholic Cemetery. Perhaps most influential was Father Isaac A. Thorne (1889-1951) who was a Torbay native. He became parish priest of St. Thomas Aquinas in 1922 and ministered during some of St. Lawrence’s most difficult times. He is noted for initiating projects for parishioners during the Great Depression; he organized relief programs at the time of the Tidal Wave of 1929; he helped rescue the survivors of the Truxton and Pollux ship wreck in 1942 and provided last rites to the victims of this wartime disaster. Father Thorne also has the distinction of organizing the first competitive soccer game between St. Lawrence and the rival soccer community of Lawn in 1922; a game for which St. Lawrence has become renowned.

The Cemetery for Priests and Religious Sisters has spiritual value because the nuns and priests buried there were members of a religious Congregation who were active members of the Roman Catholic Parish of the town. The mission of the Congregation is to extend God’s love, justice, peace and compassion. Nowhere was this more obvious than in the sisters’ care for the sick, the infirm and aged through their ministry of visitation, and in the tireless guidance and care provided by the priests. Their burial in this town, which they freely served, is an on-going symbol of how their ministry of compassion and mercy permeated the lives of the people of St. Lawrence.

All those elements that define the significance of those who are buried in the cemetery grounds, including:

-the small size of the cemetery area;

-the use of the cemetery as the burial grounds for only priests and nuns;

-all interred are members of and served under the same religious organization;

-the similarities of the Religious Sisters headstones which are identical, including their concrete construction and each one in the shape of a cross with the name of the deceased and the date of death:

-the similarities of the Priests headstones constructed in concrete and all bearing a single cross at the top;

-the statue of the Sacred Heart of Jesus, and;

-size, location and orientation of the cemetery. 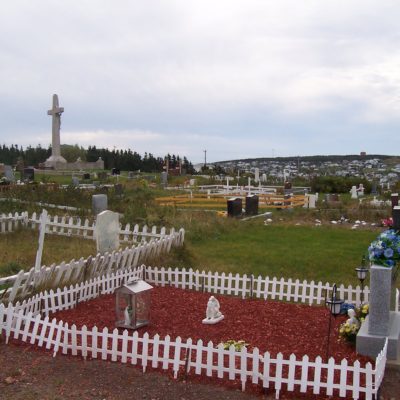