Precious Blood Roman Catholic Church is located in St. Andrew’s on Newfoundland’s west coast. Built in 1912, it is a timber framed wooden church built in the Romanesque style. This designation is confined to the footprint of the church building and bell house.

Precious Blood Roman Catholic Church and Bell House was designated a Registered Heritage Structure by the Heritage Foundation of Newfoundland and Labrador in 2001 due to its architectural, historic and environmental values. Precious Blood Roman Catholic Church is architecturally valuable as an excellent example of the Romanesque style of architecture employed in a rural setting. While the main elements of the Romanesque are preserved such as rounded arches the design is essentially simplified. For instance, the church is constructed of wood rather than stone and the layout itself is simplified. The general three-level pattern of the arcade, triforium and clerestory is preserved but simplified. These simplifications represent the rural setting in which the church is set. The church is constructed mainly of local fir and other local materials donated by the parishioners. Furthermore, the church was built by the parishioners and the fact that it remains standing almost 100 years later stands as a testament to the quality of craftsmanship during this period. Precious Blood Roman Catholic Church is historically valuable for its association with the MacIssac and MacNeill families. While the church was built by members of the congregation, two people in particular are noted as having made an important contribution to the construction of the church; Steve MacIssac and Dan MacNeill. The MacIssac and MacNeill families are credited as the first settlers in St. Andrew’s. These families were Scottish who arrived from Nova Scotia in the mid-19th century. The grounds of Precious Blood Roman Catholic Church feature a bell house that was built in the 1940 and houses a bell that is over 100 years old. This bell house is valuable as a rare church feature. Most churches feature a bell tower as a part of the church, a separate bell house is a rarity in Newfoundland. Source: Heritage Foundation of Newfoundland and Labrador property file “St. Andrew’s – Precious Blood Roman Catholic Church and Bell House – FPT 1717”

All elements that define the building’s Romanesque design including: -wooden construction; -interior woodwork; -wood shingles; -rounded arches, keystone motif; -transom window over doorways; -narrow clapboard; -arcade, triforium and clerestorey windows; -stained glass; -spires on main façade of church; -rounded apse at rear of church; and, -wooden doors with with glass inserts. All those vernacular design features of the bell house, including: -building height, massing and dimensions; -placement of bell; -location of bell house in relation to the church; and, -traditional wood construction. 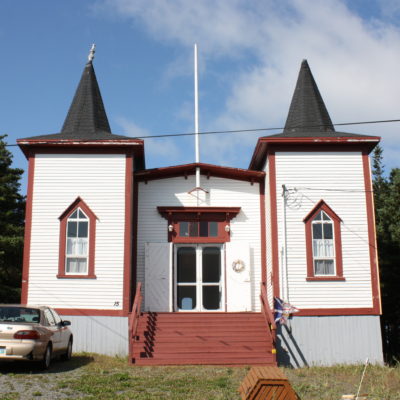 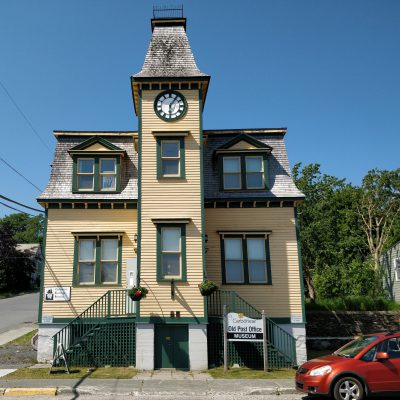 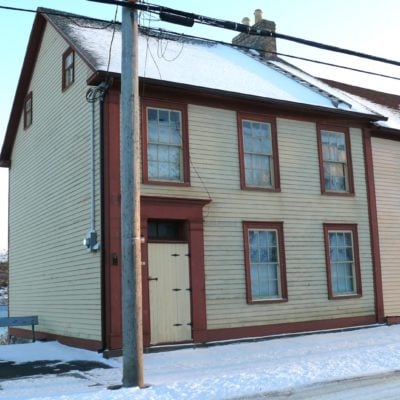