32 Queen’s Road is a semi-detached, three-storey stone structure located on Queen’s Road, in downtown St. John’s. The municipal heritage designation is confined to the footprint of the building.

32 Queen’s Road was designated a Municipal Heritage Building by the City of St. John’s because it has aesthetic and historic values.

32 Queen’s Road achieves aesthetic value because it is a good, surviving example of a mid-19th century masonry structure, built in the Queen Anne Revival style of architecture. It has many characteristics of this style, including an asymmetrical facade and two-storey bay windows. The Scotch dormer at the top of the bay gives the whole structure the appearance of a tower. Because this house is one of a duplex the proportions are significantly smaller, and while a substantial front porch is usual for the style, this house has a small one, enclosing just the front door. Details on the porch are in keeping with the simple, moulded window trim, and a transom and narrow side lights add an open feeling to the small space. The front facade is sheathed in brick, while the remaining sides are constructed of rough cut ashlar. The side and rear windows are enhanced by the brick trim surrounding them. Windows vary in size and shape yet, are proportional and in keeping with the style. The use of brick and stone in St. John’s is quite unusual in a residential property, yet this house fits into the neighbourhood quite fluidly. The property is enclosed by an original iron fence and sandstone steps with an iron railing lead to the front door.

32 Queen’s Road is historically significant because it predates the 1892 Great Fire of St. John’s. Built between 1854 and 1875 this house survived the devastating conflagration that consumed much of St. John’s. 32 Queen’s Road fell in the path of the terrible fire that burned for a full day and night, fuelled by the closely spaced, wooden buildings that defined St. John’s at that time. The house survived, but was not unscathed. While the exterior walls survived, the interior had burned out and had to be rebuilt. Today, the house retains most of the original, exterior characteristics and is a testament to its excellent construction.

All those elements that encompass the Queen Anne style of architecture executed in stone, including:

-transom and side lights; 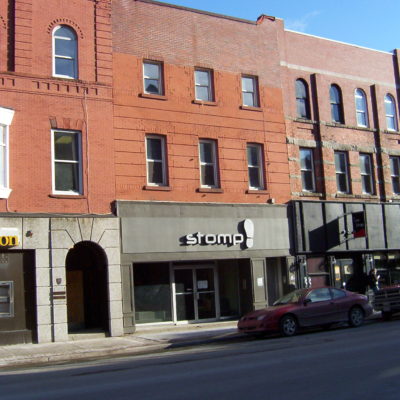